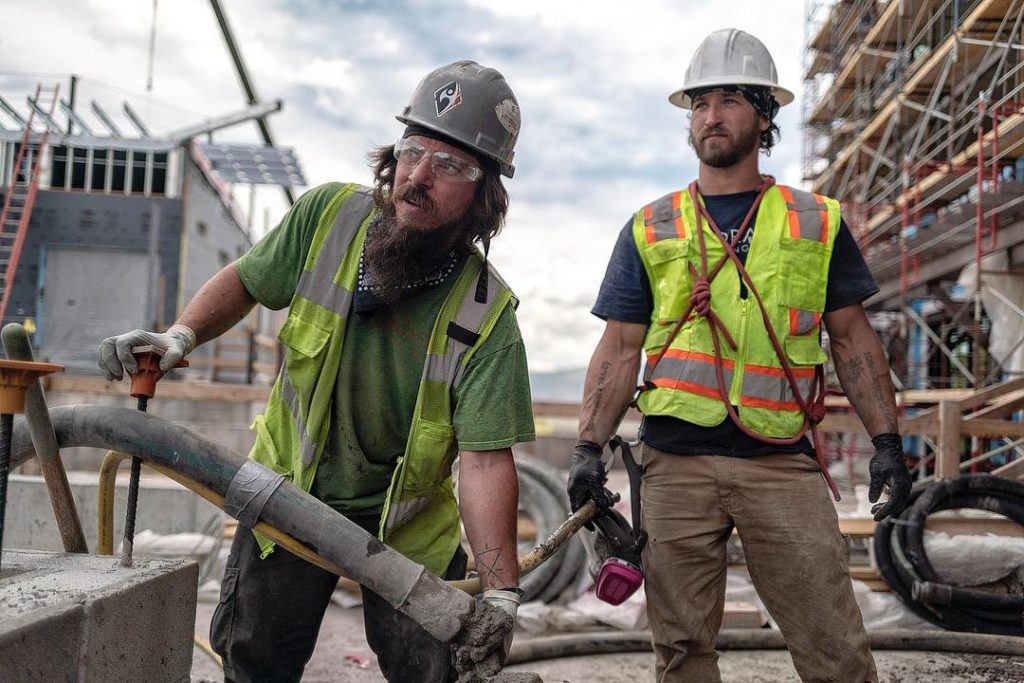 Work is underway on what will be Colorado’s tallest indoor rock-realistic climbing wall, towering at 54 feet high and running directly up the front of the new Limelight Hotel in Snowmass, part of the $600 million Snowmass Base Village project. The massive five-story climbing wall will be unveiled when the Limelight opens late this year and its granite-like surface will mirror featured climbs near Snowmass, including the popular Grotto area on Independence Pass.

Colorado’s Boulder-based Eldorado Climbing Walls designed and is constructing the striking structure that will feature an auto-belay system with three different lanes and six routes. According to Eldorado Director of Sales and Marketing Christina Frain, its design will provide features and holds to allow all climbing levels to challenge themselves on the rock. “It’s pretty unique to have this size of wall anywhere. When unveiled it will be an amazing piece of climbable art and an icon for Base Village,” said Frain. “Experienced climbers will be impressed and want to climb this rock, while beginner and intermediate climbers will be able to use their imagination and climb per their skill level so everyone will be successful.”

The wall is the brainchild of East West Partners’ Andy Gunion and John Calhoun who said that when they began work on the Limelight Hotel and Residences building they saw a need for something spectacular to tie in everything from an architectural and design standpoint. “We wanted to do something different and unique, something you don’t normally see in a hotel or mountain town, especially at over 50 feet tall,” said Calhoun. “It will be the centerpiece of the new Base Village and entice our guests and their families to challenge and accomplish amazing feats while challenging our local climbers to test themselves year round.”

The installation process, which began last month, has been strategically planned as work is taking place in an active construction site. Eldorado Project Forman Wayne Collins says with the exception of 47 shapes that were made in Boulder and shipped to Snowmass to act as the skeletal structure for the wall, the majority of the wall is being built on-site. He says approximately 23 cubic yards of concrete was sprayed to create the actual structure, which was followed by Eldorado’s “wall artists” and ironworkers who shaped and molded the wall into its rock-realistic form, including brushing and scraping to create holds, features and more.

This was followed by installation of 725 holes/nuts placed within the wall to create attachment points for climbing holds to allow for a variety of routes. Paint is currently being sprayed to finalize its natural look and the final piece will be the installation of the auto-belay system and flooring, which will occur prior the Limelight’s opening, says Collins. “Working on a climbing wall this tall has its challenges anywhere,” said Collins. “Working on such a structure in an active construction site has added complexities but we’ve enjoyed every minute. It’s gratifying to watch such a structure of art be built no matter the location, and we really believe it will have everything experienced climbers and those new to the sport will want.”

The climbing wall is scheduled to open to the public at the Snowmass Base Village and Limelight Hotel Grand Opening Celebration on December 15, 2018.

Only 5 Limelight Residence remain for sale featuring both two-and three-bedroom floorplans. All offer amazing views of the mountain slopes or plaza and place you in the center of all the action happening in the Limelight Hotel and Base Village.

The Snowmass Base Village project is a collaboration between three Colorado-based players in the mountain resort business including East West Partners, Aspen Skiing Company and KSL Capital. Located at the a base of Snowmass Mountain, the project includes 99 rooms and 11 residences in the new Limelight Hotel; the Lumin Residences, featuring three showcase penthouses; One Snowmass with 41 residences spread across two buildings; a Community Center Building and the new Base Village public plaza, which will showcase an ice rink that turns into a summer events lawn, pop-up children’s fountains and expanded retail and dining.