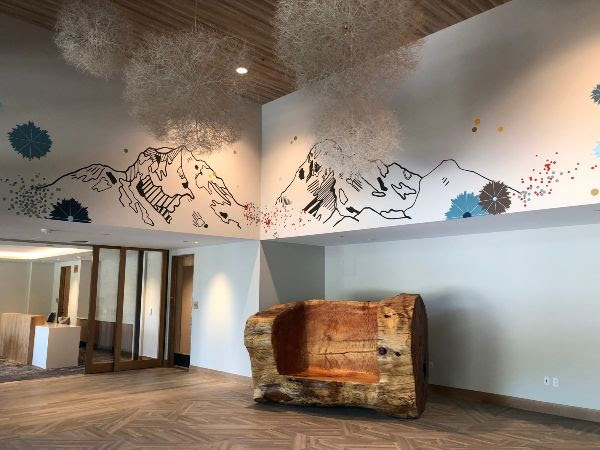 East West Partners, Aspen Skiing Company and Town Officials spoke about the growth and change to Snowmass Base Village in September at the annual Upload for the Download event. Click here or read the Aspen Times article below to learn about the additions to the Village including a new arrival center, The Collective, retail, restaurants and more.

September 13, 2019–Aspen Skiing Co. and Snowmass Village officials had a lot of growth and change to talk about with locals at the annual Upload for the Download event Friday.

For over an hour, Skico and town representatives talked about the successes of last winter and this summer at Snowmass Ski Area, along with what both locals and visitors have to look forward to in the village and on the mountain as early as Thanksgiving.

“Really we’re here to celebrate — celebrate an amazing summer and an incredible winter,” said Skico President and CEO Mike Kaplan. “And then of course, we’re here to look ahead.”

Similar to the Afternoon Blend gathering in the Sundeck Restaurant on Aspen Mountain last week, Kaplan laid out stats from last winter and defended the Ikon Pass as a key driver of attracting the next generation of skiers and snowboarders to the Aspen-Snowmass area.

Kaplan said that at Snowmass Ski Area last winter there were eight days where over 9,500 skiers and snowboarders were on the mountain. He noted that those were big days, but still divided out to under three people per skiable acre of Snowmass terrain. When taking Ikon Pass skiers and snowboarders out of those big ski day stats, Kaplan said five days would have been over 9,500.

“We’ve always been about sharing … sharing this place with one another, with family, with visitors from Brazil, Argentina, Russia or Denver,” Kaplan said. “I’d ask you to give that some thought and hopefully join all of us in welcoming all of our friends when they come here.”

But unlike the Aspen gathering last week, winter on the mountain was not the key topic of conversation at Elk Camp on Friday.

Instead, the discussion largely focused on the development the town and ski area has experienced over the past year, namely in Base Village, and the continued growth expected moving forward.

This winter season, three buildings are set to open in Base Village: The Collective and the two One Snowmass buildings, otherwise known as buildings 6 through 8.

Andy Gunion, managing partner for East West Partners in Snowmass, ran through these new Base Village additions for the local crowd Friday.

Gunion said The Collective, which aims to be the “heartbeat” of Base Village, is set to open in early December. The new building will house a bar and restaurant run by Martin Oswald, the longtime local chef who heads the Pyramid Bistro in Aspen. There also will be a “flex space” for people to gather and an interactive, experiential art center and game lounge, Gunion said.

In the One Snowmass buildings, Gunion talked about the opening of a new arrival center adjacent to the current Base Village transit center, an eyewear store, and a dynamic art gallery run by local artist Kelly Peters in the West building; and an Aspen JUS location, a yoga studio run by local yogi Aaron King and the new 6,000-square-foot medical clinic in the East building.

Both One Snowmass buildings should open this winter, with the West building set to open in December and the East building to open in January, Gunion said.

Here are some of the major projects to be completed by the winter season Cross disclosed at the Friday event:

The remodel and rebranding of the Sam’s Smokehouse restaurant on top of Sam’s Knob. The eatery will feature “Mediterranean and Italian cuisine with mountain soul,” along with a slipper room and live-action kitchen.

More parking spots in Base Village and near the Snowmass Rodeo lot, including a new Skico app feature that shows real-time parking availability

She said the town sales tax revenue has increased 17% over the past year, along with town occupancy rates, which Butler feels shows how more people are wanting to spend time in Snowmass.

Butler encouraged locals to stay engaged and to voice their opinions about town development, noting Town Council takes community input seriously and recognizes its importance in all of the village’s successes.

“It takes a community working in partnership with Skico and with East West to make this village happen,” Butler said. “So to all of you who live here, who play here, who help all of our guests, thank you.”